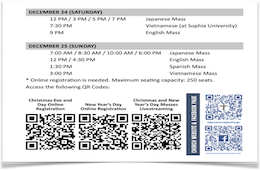 I find it easy to imagine the scene Amos described in the first reading. I’m sure you’ve seen movies depicting a large banquet in the hall of some ancient king. Not the type of banquet we see in the imperial palace today, with everything so very properly set and served, but rather a wild scene with meat and fruit piled high and the participants sprawled out on luxury sofas with maybe a leg of lamb in one hand and a large cup of wine in the other, while being served and entertained by slaves or other menials.

That’s similar to Luke’s scene in today’s gospel. Maybe it’s not such a wild scene, but there’s our rich man, dressed luxuriously, eating the finest foods and sharing drinks and boisterous laughter with his companions. Napkins were probably not invented yet, because instead of napkins, they wipe their fingers on pieces of bread which they just drop onto the floor for the dogs to eat.

But there’s also a beggar sitting outside, wishing he could have one of those scraps eaten up by the dogs. He is hungry and has sores on his arms and legs. The dogs that have eaten their fill under the rich man’s table come around and lick his sores. And the rich man inside is well aware that the beggar is out there, and he even knows that his name is Lazarus.

It’s a scene we have read or heard many times and we find it easy to imagine. But do we ever translate the scene into our own situation? Do we ever realize that a large percentage of humanity, ourselves included, live comfortably while another large percentage live in poverty or at subsistence level? There’s nothing wrong with having and enjoying the goods of this earth, but as the Popes have pointed out over and over, there is a vast unbalance in the way the goods of this earth are distributed. Wealth can make us blind to the needs of others. The well-off enjoy more than their share, while the less fortunate have to budget their small income carefully, or often enough have to go without the basic necessities of life.

Today’s parable goes on to show what happens to each of the main characters in the afterlife. Lazarus is welcomed into the company of Abraham and the blessed, while the rich man is forever consigned to the torture of knowing he has lost happiness and can never regain it. Our present behavior has an effect on our present and eternal life. Like the rest of his family, the rich man had the Word of God through Moses and the prophets, but he preferred to live in the lap of luxury and did not make any effort to share his wealth with the less fortunate people around him. As today’s psalm reminds us, the Lord favors the oppressed, the hungry, prisoners, the blind, widows and orphans. But he needs us to show this concern of his and to lift up the needy and the ailing, just as Paul told Timothy in the second reading: remain vigilant, gentle, and concerned for others.

We must accept Christ’s Gospel of love, so that the many forms of inequality and discrimination in the present world may be eliminated. No one must be excluded. God’s plan is essentially inclusive and gives priority to those living on the existential peripheries [= the outer edges of society]. Among them are many migrants and refugees, displaced persons, and victims of trafficking. The Kingdom of God is to be built with them, for without them it would not be the Kingdom that God wants.

The inclusion of those who are most vulnerable is the necessary condition for our own full citizenship in God’s Kingdom. Indeed, the Lord says, “Come, you who are blessed by my Father. Inherit the Kingdom prepared for you from the foundation of the world. For I was hungry and you gave me food, I was thirsty and you gave me a drink, a stranger and you welcomed me, naked and you clothed me, sick and you took care of me, in prison and you visited me” (Mt 25:34-36).

Dear brothers and sisters, and, in a special way, young people!

If we want to cooperate with our heavenly Father in building the future, let us do so together with our brothers and sisters who are migrants and refugees. Let us build the future today! For the future begins today and it begins with each of us. We cannot leave to future generations the burden of responsibility for decisions that need to be made now, so that God’s plan for the world may be realized and his Kingdom of justice, fraternity, and peace may come.

And he ends with this prayer:

Lord, make us instruments of your justice, so that where there is exclusion, fraternity may flourish, and where there is greed, a spirit of sharing may grow.

Lord, make us builders of your Kingdom, together with migrants and refugees and with all who dwell on the peripheries [= outer edges of society].

Lord, let us learn how beautiful it is to live together as brothers and sisters. Amen.